..what do you do with them? 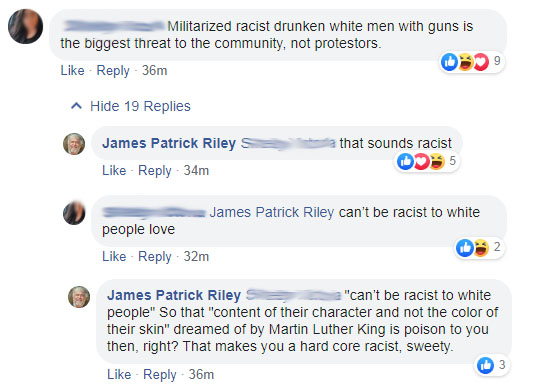 I have had hundreds of exchanges like this one with earnest young people (mostly young ladies; in an earlier age they would have been the severe, sexless sisters of Unitarian missionaries), who insist, without blushing, that you simply cannot be racist towards white people, particularly white men. This appears to be true, because even though you could not replace “white” with “black” in her first observation here, the Facebook censors simply do not care how much abuse you heap on old white men.  Someone threatened to burn our farm down the other day, and that post has still not been taken down.

We should ponder the consequences of this double standard very seriously.  What did racism and prejudice allow in previous chapters of world history?  Since African Americans, at one time in American history, could be ridiculed and dismissed simply for being black, how did that play out?  Separatist theology, segregation, Jim Crow, Lynchings.  Right?  And how did German and Polish Jews fare when they were made into mere creatures?

Personally, I don’t think anyone is coming (yet) to put me in an interment camp, but those folks who don’t think they can be racist towards white people, should at least consider the sort of argument they are making.   Both the KKK and the Nazis would be entirely comfortable with that kind of argument.  If they were around, they would give you a hearty high five, comrade.

Virus Didn’t Work, Back to Race
All Lives Matter