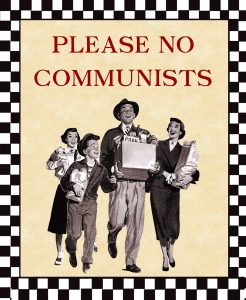 When I was a young teenager, I had the keen sense that you couldn’t make “Commie” jokes or register any alarm about the threat of Communism. In 1973, it wasn’t so much about McCarthyism as it was about your own reputation. The left had successfully characterized anyone justifiably worried about Communist totalitarianism as a goat-roping John Bircher. My 8th grade history teacher in 1974 flatly disbelieved the stories of horror coming out of the Soviet Union, and one of my high school teachers spoke glowingly of command economies and Soviet power. (He was under the profoundly mistaken impression that the Soviet Union produced much less grain under the Tsar.)

It didn’t matter what sort of depravity was taking place in Cambodia, China, Cuba, North Korea, the Eastern Block and the Soviet Union, expressing worry about Communism, among the better sort, left you looking like one of Jed Clampett’s toothless, country cousins. I recall a Petticoat Junction episode where Uncle Joe was seen to absurdly worry about “Rooshin spies.”  I’m convinced the American left’s hatred of anti-Communism made the Vietnam war difficult to fight. The cause was made to seem comic.

By the 1980s, after Ronald Reagan had successfully schooled the nation on the moral, spiritual, economic, and civil liberty wickedness of Communism, it became okay to make fun of “Commies” again. Even corporate America got in on the act, with commercials mocking Soviet consumer options and one party rule.  In retrospect, we should have demanded much more than ridicule.  We should have taken some scalps.   The Chinese Communists were then, and are now, little more than barbarians.   Mao’s “Great Leap Forward” (collectivizing agriculture) left more than 20 million people dead, with reports of families eating their children, and party bosses forcing fathers to bury their hungry sons alive.  The legacy of Castro’s Communism is a once-thriving Havana now a decaying ruin where people live in structures that would have been condemned in any Western country decades ago.  We now know even more about what monsters Lenin and Stalin really were.  If you haven’t seen the 2019 movie, Mr. Jones, you should – 20th century genocide and cannibalism ignored officially by the New York Times.

Communism isn’t just a failure economically.  It’s a raging, murderous monster, quite willing – and even happy – to engage in wholesale slaughter.  A young Marxist my freshman year at Stanford had a wallet with an inscription in a language I don’t remember.  I asked him what it meant.  He said “eat bourgeoisie children” and then he smiled at my reaction.

So, here’s the thing: I simply do not understand people who feel it is inappropriate to ridicule and revile such a heartless, soulless ideology.  When Covid broke out, coming out of Wuhan, China, and I labeled it the “Commie virus,” some proper-think people on our email list were absolutely scandalized.

Hello?  People?  Listen up:  Did you know that the Chinese Communist party harvests organs from political prisoners?  Still?  (That’s an NBC link by the way, not the Epoch Times.)  Calling Covid the “Commie Virus”  is not an anti-Chinese sentiment.  It’s AN ANTI-COMMUNIST sentiment, and more Americans need to get feverishly on the anti-communist bandwagon.

How do you extend a welcoming hand to someone who would cut it off it they could get away with it?  Don’t let them date your daughter, teach your children, or stand in your pulpits.  They have blood on their hands.

Two Kinds of Obedience
Are we all dead yet, Barb?
Ads by Google