An optimistic take on prophecy…

Our God is Marching On..

“For three sins of Israel, even for four, I will not relent.
They sell the innocent for silver, and the needy for a pair of sandals.
They trample on the heads of the poor as on the dust of the ground
and deny justice to the oppressed.
Father and son use the same girl and so profane my holy name.
They lie down beside every altar on garments taken in pledge.
In the house of their god they drink wine taken as fines…”

When you read the warnings of the prophets, there’s a part of me that trembles, and then, when I read the specific charges, and I remember the vast, patient mercy of God, I get a little more postmillenial, and a little more optimistic about the advancing triumphal reign of Christ on earth now.

Consider this indictment by Amos..

“..they sell the innocent for silver and the needy for a pair of sandals..” 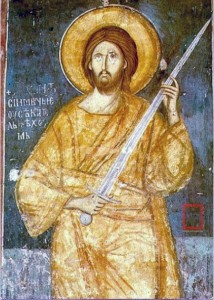 In Western (Christian) culture, unlike Muslim culture, slavery is now outlawed. Thousands of men died to make sure of it. And even when slavery did exist in Christendom, a man’s life was certainly worth more than a pair of sandals. Can you imagine an economy so impoverished, and a heart so course, as to sell someone for a pair of shoes?

Yes, the poor are always with us. But can anyone honestly compare the plight of, say, America’s poor to the miserable wretches Amos is describing? Can anyone really say justice is universally denied to the oppressed? We have entire industries devoted to class action suits, to the whining of poverty-pimps, and the buying off of race-baiters. If anything, we are a country overly obsessed with the plight of the poor.

“..Father and son use the same girl and so profane my holy name…”

You know what? I’ve never known, EVER, in my life a father and son who had sexual relations with the same woman, and Amos here appears to be lamenting a general condition. I’ve heard stories about Joe Kennedy, but it’s a story precisely because we all consider it so despicable. Only a thieving bootlegger would bed one of his son’s wives or girlfriends.

“They lie down beside every altar on garments taken in pledge…”

We have laws in the west about fair debt collection. You can’t take a man’s clothing, and in some cases it’s very difficult to take his homestead. And if the prophet is talking here about pagan sex rites in front of pagan gods, I’m guessing even Hugh Hefner would have trouble selling that spiritual franchise to a country that still has Cotton Mather back there in their collective conscience.

“..In the house of their god they drink wine taken as fines…”

I have yet to hear any defector from Christianity talk up the virtues of Astarte, or Molech or Aphrodite. When we lament the worship of our cars and homes, we’re speaking figuratively. I have yet to see anyone actually make a blood sacrifice to their new Mercedes.

Are we in cultural and spiritual decline over the last 50 years? Of course. We’re a very lazy, blind generation by historic standards, but I have confidence we will wake up soon. Dispensationalism and pietism and non-Biblical theology will evaporate, or recede.  The light will advance.

The King will wake us up, and we will move forward.

The Church Isn’t Sexy Enough
How to Pick A Church