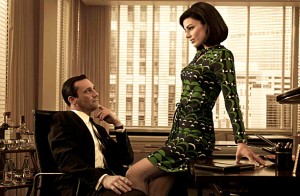 Of course, Mad Men is a well written, well observed, beautifully art-directed show, or we wouldn’t be talking about it. I wish there were more shows like this in production, but I’ll start by  telling you why my twenty year old daughter couldn’t watch it:

“It’s too cold,” she said, “I can take jarring violence and even awkward, public sexuality, as in, say, Peaky Blinders, but there’s  a blood tie underneath all of that, a family.  Don is too cold, too detached.  He just disappears out of his children’s lives and doesn’t look back..”

John Updike once wrote that Nabokov’s genius might have been amplified by his atheism, that an atheist is free to make judgments about the way life looks, on the surface, without offending God, and certainly almost gleeful about offending any denominational sensitivities.  It’s a freedom that opens up territory Frank Capra would have had trouble exploring, and that may explain its appeal to our sin nature. Characters are free to bitch, and scratch, and hump right on the couch in Pete Campbell’s office, or in the alley, to relieve tension after a New York mugging.  (I mean, seriously, what better way to handle the cognitive liberal dissonance of the civil rights movement is there, if you can’t enjoy a little humping after the underclass has robbed you?)

But ultimately, humanism is pretty cold soup. The characters feel the pain of all this random coupling; they register the hurt on their children’s faces when the marriages fail; they drink their way through their ethical failures, but just when some of this pain might have turned them to God, they remember the humanist existential mandate — the God of Abraham, Isaac and Jacob is terribly out of fashion–even if they land the Israel Travel Commission account. Mad Men is like a home without parents.  You can drink, consult the ouija board, play spin the bottle, but ultimately, you miss mom and dad, even if you can’t bring yourself to say so.

The resulting ethical system is a little strange.  Don can sleep with other men’s wives, but when Lane Price fudges the books, it warrants immediate termination.  The swift and condign punishment appears brutally clear to Don:  he can’t trust a man who cheats with the firm’s money.  Secretaries, fine.  Money, no.  Sure, assume someone else’s name, engage in all sorts of commercial artifice, and disappear from work, unexplained, for weeks — but fudge the books a little to help with a tax problem?  No sir.

Just when Don’s existential world gets too cold, he has to remember his great defense against God, and against any temptation to call his behavior “sin.” He remembers, of course, his hideously hypocritical upbringing, in a house that mixed old time, mean-faced religion with bordello girls.  (Without exception, the back story flashbacks almost always failed for me; it truly appeared as though Matthew Weiner were attempting to imagine a protestant farm life as though it were conceived by a carnival spook show operator.)

Sure, it’s all beautiful and sexy and glamorous, and it’s a largely accurate memory of a decade that saw us send boys to fight a noble war in Vietnam, without teaching them the “noble” part.  It’s a story about a country that was beginning to forget God, and its history, as it got obsessed with nylons.

I kept hoping Weiner would realize that, and bring Don home, but that would mean embracing something strange, something transcendent, something called “meaning.”   And any meaning but Western meaning is okay in Weiner’s world: Don just disappears. He assumes the lotus position and chants his way into the sunset.

That brings us back to the artistic refrigerator.  The humanist artist may not know it, but he resists spiritual truths, and that leaves everything on his plate cold, and leftover.