If you are under 18 years old, get your parents’ permission to read this. It’s not explicit, but I do give advice, and that’s your parents’ job…

Just to be clear, I want to make sure you all know what this is not — an ode to Hugh Hefner.

Matt Walsh, Ben Shapiro, and others have correctly pointed out his many sins, as did I yesterday.

I’m far more interested in what this story reveals about our approach to sexuality, particularly among those of us who consider ourselves “people of the Book.” As I wrote yesterday, I witnessed a number of women in my life express great satisfaction at his death, some of them blurting out “good riddance” with a passion I didn’t witness upon the death of Fidel Castro or Osama Bin Laden.  Matt Walsh, after calling Hefner a pimp and a pornographer, concluded Hefner life’s work was to “amass a collection of desperate women who were willing to be used and exploited.” Hefner’s no role model, certainly, but I don’t think he kept the playmates in a dungeon somewhere, promising a crust of bread for a photo. If those women were desperate, they were desperate, and eager, to show off their God given gifts in a way that represented a collaboration. We may not agree with that display, but Hefner wasn’t tying them to the rail road tracks, and the collaboration itself speaks to a God ordained reality we shouldn’t ignore: Men enjoy women, and real women enjoy being enjoyed.

Bottom line, (sorry): In criticizing Hefner, I want to make sure we don’t demonize my brothers, that we don’t vilify desire itself.

The simple truth is that from the time we’re boys, men are taught to be ashamed of that desire. I could introduce this concept in many ways, but I’ll tell a family story that I think speaks to the point. My father was fond of saying, “I married your mother on August 6, 1942, and your older brother Mike came along 9 months and fifteen minutes later.” Depending on her mood, mom would either wince or hit dad in the side. In her more generous moments, she might laugh.  What fascinates me is the story of how such stories came to be considered inappropriate.  They speak to a division in our Christian world view:  Birth is holy, but sex is, well, keep it quiet, please. When we cross the Red Sea, the ladies don’t dance anymore, people. We don’t pay for brides with the foreskins of Philistines, folks. Turn it to the boring Hallmark Channel. No sex, please.  We’re Christians.

When we recoil at Hugh taking advantage of an 18 year old beauty, we should not, as I wrote yesterday, throw the beauty out with the bathwater.  My dad’s humorous story taught me something when I heard it as a teenager.  I may not have connected all the dots at the time, but he was telling me he was once a young sailor, in love with a great beauty, and more than that — he desired her.  He not only desired her. He was proud of that desire. 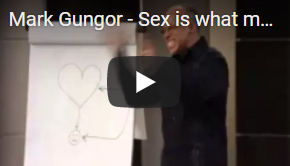 On the contrary, if a young man sees his mother, or his sisters, dismissing male desire as a kind of goat-pen grotesquerie, if he registers your disgust at pornography as disgust at his longing, he’s going to feel pretty disgusting indeed, because I can tell you, as a former 18 year old boy, his body itself is serving up disgusting reminders on the hour.  If you want a good laugh on this subject, a good friend posted the video on the right yesterday. There’s a basic truth illustrated here that we often forget: men use love to get sex and women use sex to get love. Understanding this reality is key to our getting along with each other, but the church is really good at pretty much telling only the ladies’ side of the equation: love each other.  Right, we got that one, pastor.  But what about “lust each other.”  That’s important too.

In church culture, with our purity rings, our modesty lamentations, our endless remonstrances against libertine pop culture, our insistence that young people have two degrees and a pension before they marry, there are more than a few young people out there, (and some lonely married people) who are going to properly conclude sex is a kind of unwanted step child. It’s the very last hunger that can be fulfilled — and then only if you’re spiritually superficial.

Ponder this about church culture: we write about love all the time, as well we should, but do we ever give desire its due?  Would any of you mothers really have a baby suckling at your breast if your man didn’t desire you in a way potent enough to make that child possible?

Hugh Hefner, without doubt, exploited desire in an irresponsible way, so, again, please understand this:  I make no defense of Hugh’s personal life, his defense of abortion, his hatred for God and our history, but ponder this:  I don’t hate poppies because heroin dealers kill people with the poison from the petals.  You shouldn’t let Hugh Hefner pollute one of God’s great gifts, by making your critique of his life sound like a critique of what he improperly celebrated.

The fact is, Christian couples, you could learn something from Hugh’s centerfolds. They may be exploited, to be certain. They may be seeking attention. They may give themselves to multiple lovers, but they represent an ardent desire every man struggles with mightily — the desire to find his Eve, his lover, his woman.  Call the girl in that centerfold a whore all you want.  She may get promiscuity all wrong, but she gets one thing right, even if she fakes it to get there: she represents, in one small dimension, the Song of Solomon lover who desperately wants her man. If you allow yourself to think that simply because she’s in Hugh Hefner’s employ, she hasn’t gotten that one part of God’s truth right, then you are missing something — and so is your man.  She may not have the love part down, but she has the lust part down.  If any of you ever wonder why Boaz ran off to get approval so quickly, it just might because Ruth put herself under his blanket, and both Ruth and her mother-in-law knew men.  You want a good, honorable man like Boaz?  Try being a winsome, sexy woman like Ruth, and a wise man-knowing woman like her mother-in-law.

I realize, at this point, that every woman is wondering if they match up to a centerfold.  That’s the age old complaint, isn’t it?  But it misses the point.  Real men don’t care if you are air brushed.  They care about how much you need real sex, real love. I got to thinking how I would judge an old crone who died (the female counterpart to Hugh Hefner) with an empire based on men’s flesh. It wouldn’t bother me — certainly not in the visceral way Hugh’s life bothered some of the women in my life.  It would be a novelty.  I may feel sorry for her on some level, but I would marvel at the notion of a woman who loved men, just for being men, as much as we love all of you for being women.